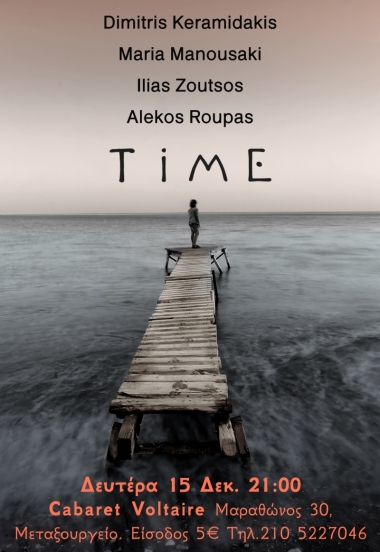 
The album “Time” is possibly one of the most updated album releases in the Word Music category in Greece. Four soloists experiment with sounds making their own authentic musical universe. They approach the essence of Jazz music, improvisation, either through their original compositions or through arrangements of age long melodies of the Greek musical tradition. Dimitris Keramidakis is the pianist of the group and composer of most of the tunes included in “Time”, Maria Manousaki plays the violin in the album, Ilias Zoutsos is on vocals, and also on the Cretan lyra and laouto (Greek lute) and Alekos Roupas is the percussionist of the ensemble. All together they create an international musical language which is characterized by its defined aesthetics and Greek flavor. “Time” is released by Bandcamp at December 2014. http://tinyurl.com/bandcamp-time

Dimitris Keramidakis began as a child prodigy. He has been awarded for international music competitions and has graduated from the State Conservatory in 1996 after attending piano lessons for only 4 years. In 1997, he takes part in concerts around the world and continues earning scholarships for his studies with: R. Szidon, R. Gerald, Mr. Loether, G. Shroeder, M. Mollova. During the same time, he continues his creative spree through the world of improvisation and electronic music, his compositions develop new forms and trends. He has over 2000 participations in Greek and foreign discography, seminars, music for film and theater. In recent years, apart from producer, composer and soloist he has shown an interest in integrating traditional, Mediterranean and Western African music with the sounds of the piano, the magic of technology and the freedom of jazz. In 2014 he is awarded for his contribution in music. https://www.facebook.com/dimitris.keramidakis?fref=ts

The Greek south African violinist Maria Manousaki, is an international artiste, active in the Jazz and World Music scene. Maria currently lives and works as a freelance musician in New York. She received a scholarship for the Berklee College of Music conservatory in Boston, where she graduated with honors. Maria has appeared in many prestigious venues around the world, including the Perth Concert Hall in Australia, the Frank Sinatra School of The Arts in New York, the MoMA Museum of Modern Arts, the Lincoln Center in NY, International Film Festival in Dubai, the Royal Wedding in Qatar, the Megaron Concert Hall of Athens and the closing ceremony for the Mediterranean Olympic Games in Pescara Italy.http://www.mariamanousaki.com/

Ilias Zoutsos’ first contact with music begins with the Cretan Lyra. A few years later he starts learning the violin and studying classical music in Greece and abroad. He acquires a diploma in violin and music theory and graduates with a Distinction for exceptional performance from the National Conservatory of Athens. Later on, Ilias is a candidate as a Ph. D. for the department of Musicology in the University of Athens and he is a permanent member of the Athens Symphony Orchestra (First Violins). He performs in some of the most prestigious concert halls in the world (Thailand Cultural Centre-Thailand, Teatro Real-Madrid, Acropolis, Ancient Theatre of Ephesus, Town Hall-New York, Megaron Concert Hall Athens and Thessaloniki). From 2009 Ilias is in the prime of his personal creativity, composing songs and instrumental music, also adding  singing and guitar to his repertoire. He co-operates with L. David, G. Markopoulos, Th. Papakonstantinou, Ross Daly, Psarogiorgis and with the American TV network NBC, composing music for a series of documentaries.
Discography: “Simio” (2012) and “Riza” [Root] (2013). http://www.iliaszoutsos.gr/

Alekos Roupas started learning Greek traditional percussion instruments from an early age. He participated in performances and festivals alongside traditional dances.  He attended the Municipality Conservatory of Ioannina for Drum lessons. He went on to continue his studies in Athens at the Philipos Nakas Conservatory under the guidance of Petros Kourtis where he graduated from the traditional and modern percussion department. He attended private lessons and Seminars with Alex Acuna, Eguie Castrillo, Richie Gajate Garcia, Yshai Afterman – Misirli Ahmet. Alekos has performed percussion for a large number of sound tracks, for countless music producers and different genres and he has countless numbers of collaborations as a session musician with popular Musicians, Composers, Singers,  touring around the world with them too when required. His recent significant collaboration is with Gloria Gaynor in Athens for a private concert. He is an active member of the percussion ensemble “Drumvoice”. Since 2011 he teaches at the Nakas Conservatory, giving the first seminars on Multi percussion set and modern approaches.