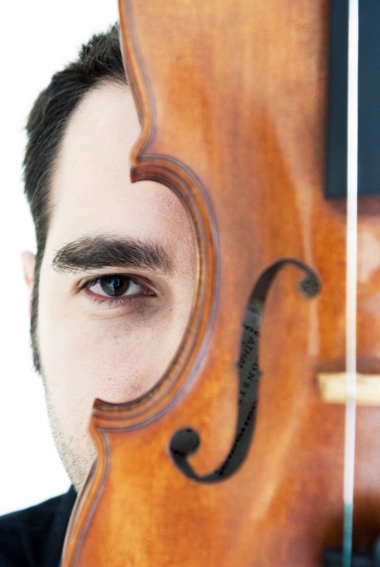 Ilias Zoutsos is a remarkable creator and performer. Being a traditional Cretan lyra player on the one hand, a PhD and soloist on classical violin on the other, he searches for the mean between folk and academic and therefore he originates with his work a new and distinct artistic world. Greek lyrics and poetry are set to music with main source the twofold guitar-voice and they are performed into a contemporary dialogue between the West and the East. Natural sounds, technology, acoustic and electric instruments are used to create musical compositions with folk, traditional, lyric and rock elements, which appear either one at a time or in combination with each other.
Furthermore, he has created two projects: “Riza” where having Cretan music as his base brings traditional music to today, and “Fos” in which having his doctorate in Athens University as his base performs classical music on the violin.
He has performed in some of the greatest concert halls of the world: Teatro Real-Madrid, Thailand Cultural Centre-Thailand, Ancient Theatre of Ephesus, Town Hall-New York, Megaron Concert Halls (Athens and Thessaloniki). He has also performed at Acropolis for the International Music Day, playing Beethoven and Saint-Saens as a soloist, accompanied by the Athens Symphony Orchestra.
He has collaberated with Giannis Markopoulos, Thanasis Papakonstantinou, Lena Platonos, Manos Eleftheriou, Dimitris Apostolakis (Hainis), Ross Daly, Giannis Haroulis and Psarogiorgis. He is a permanent member of the Athens Symphony Orchestra (First Violins) and has also co-operated with the Greek National Opera Orchestra, and with the American TV network PBS giving his music for a series of broadcasts-documentaries.