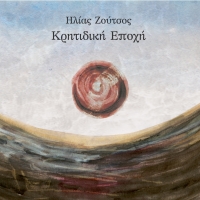 Releasing his new CD "Kritidiki epohi" (Cretaceous era) in October 2016, Ilias Zoutsos introduces his new project by composer’s Thanasis Papakonstantinou record label “Ahos”. In this album he composes the music and arranges folk music themes and lyrics of Vintsentzos Kornaros and unknown or even well-known folk poets of Crete (Yiannis Aerakis, Mitsos Stavrakakis, Michalis Dramountanis, Manolis Vitoros, Miron Skoulas), forming (in this way) 9 songs-images. Although these songs differ from one another, are yet united in total since they combine Ilias Zoutsos' basic music influences (classical, folk and rock music). The combination of the vocals (in the way we find them in Crete and in the polyphonic songs of the world) with the sound of the acoustic guitar- using pedals and effects- , forms the starting-point of creating a music innovation, which combines the sounds of the modern urban scenery with primitive music forms.
In addition to the composer himself, who plays the guitar, the violin, the Cretan lyra, sings and makes the vocals, the other musicians who take part in the orchestration are: Fotis Siotas (viola, vocals), Mihalis Kalkanis (double bass and electric bass, piano), Panos (Tsiko) Katsikiotis (drums, percussion) and Yiannis Paxevanis (acoustic and electric guitar), who is as well responsible for the production together with Ilias Zoutsos. The drawings are made by the painter-sculptor Giorgos Hatzakis.

Note by Thanasis Papakonstantinou
“Personally, I approach tradition with admiration and disrespect. With admiration as a listener and with disrespect as a composer. Such a mixture was that I distinguished Ilias for, therefore his work found its place in “Ahos", a company which apart from my personal discographic work will also give other composers the chance to introduce their work.” 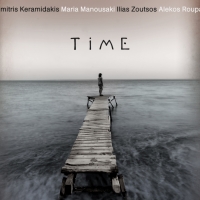 After “Simio” (2012) and “Riza” (2013), Ilias Zoutsos returns with the new album “Time”. “Time” is possibly one of the most updated album releases in the Word Music category in Greece. Four soloists experiment with sounds making their own authentic musical universe. They approach the essence of Jazz music, improvisation, either through their original compositions or through arrangements of age long melodies of the Greek musical tradition. Dimitris Keramidakis is the pianist of the group and composer of most of the tunes included in “Time”, Maria Manousaki plays the violin in the album, Ilias Zoutsos is on vocals, and also on the Cretan lyra and laouto (Greek lute) and Alekos Roupas is the percussionist of the ensemble. All together they create an international musical language which is characterized by its defined aesthetics and Greek flavor. The album “Time” is released by Bandcamp in December 2014, with cover photo from Nikos Chatziiakovou and artwork from the painter-sculptor Giorgos Hatzakis. 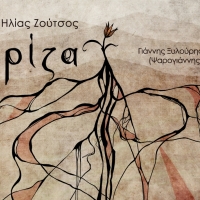 After the first CD “Simio” (2012), Ilias Zoutsos introduces his second CD entitled  “Riza” (Root).
This CD includes nine songs in folk music and lyrics, which are still played and sung today in Crete, but their origin is lost back in centuries. The CD was recorded absolutely live and is characterized by the innovation in melodic elaboration and orchestration, since using plain expressive means (two solo instruments and one voice) it directs and aims to the core of music. Apart from Ilias Zoutsos, who has arranged all the songs, plays cretan lyra and sings, Giannis Xylouris (Psarogiannis) co-operates and musically discusses with his lute and chooses -with this album- to come back in discography after many years of absence. Giannis Xylouris, who is Nikos Xilouris’ brother, is a living myth of cretan folk music and he carries the experience of a great generation of musicians who were already playing music when discography first appeared.
It's all about a sound scenery of a complete image that is old, nevertheless, in the modern affluent society it seems to be absolutely new at the same time. As the creator himself clarifies: “The title of the CD and the whole album in general came from a deep need and a phrase on which his mind has kept running for years: ‘Neither root nor blossom’”.
The CD “Riza” is released in December 2013 by Antart Productions. The production is made by Ilias Zoutsos and the drawings by the painter-sculptor George Hatzakis.

Ilias Zoutsos' first CD entitled “Simio” (Point) was released by Antart Productions in December 2012.
Having Crete as a starting point -with Cretan lyra and lute in the central roles- and the music itself as a destination, this CD combines musically the “dark” and the “light”. Ilias has composed the music in most songs and he has also written the lyrics in some of them. In the album, apart from arrangements in folk songs, there is a song of Thanasis Papakonstantinou and a less known song of late Nikos Xylouris (Psaronikos), from the age of his early discography.
The orchestration and the production are made by Ilias Zoutsos and apart from the creator in vocals, Cretan lyra and lute, in the album participate important musicians along with: Giannis Xylouris, Ross Daly, George Xylouris (Psarogiorgis) and Maria Anamaterou. The production is a collaboration with Antart Productions and the drawings are made by the painter-sculptor George Hatzakis. 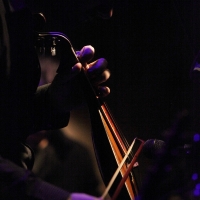 Tracks from the albums:
Yiannis Xylouris (Psaroyiannis) - To Simban (2014)
Apostolis Armagos, Ksenia Rodotheatou - To ita tou iliu (2013)
as well as tracks from the original music for the internationally acclaimed documentary “Exantas”.